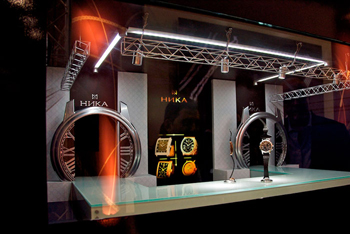 For a company of jewelry watches and accessories NIKA February marked the participation in the traditional trade fair JUNWEX Petersburg – 2013, where she will present new items fall-winter season – 2012/13.
END_OF_DOCUMENT_TOKEN_TO_BE_REPLACED

October 13 in St. Petersburg took place the official opening of the boutique, Jaeger-leCoultre, as well as the presentation of new models Reverso eclipses homage to Kazimir Malevich. His new boutique famous watches manufactory opened at number 12 on the Great Stables Street.
END_OF_DOCUMENT_TOKEN_TO_BE_REPLACED

We are pleased to inform you that on August 15 in St. Petersburg opened a new store hours of AllTime!
END_OF_DOCUMENT_TOKEN_TO_BE_REPLACED

Since 2007, Montblanc watch company with the support of the conductor Valery Gergievgo is sponsoring an international art festival “White Nights”. The company has established a reward, “New Voices Montblanc, which aims to encourage talented young opera singers. In 2007 this award was awarded the British singer Katherine Jenkins (mezzo-soprano), in 2008 – Mariinsky soprano Anastasia Kalagina. In 2009, the first award was given to two winners’ soprano Christina Kapustinskaya and baritone Alexey Markov. In 2010, it received the tenor and bass baritone Sergei Skorokhodov and Shenyang, which has since become the official company Montblanc.
END_OF_DOCUMENT_TOKEN_TO_BE_REPLACED