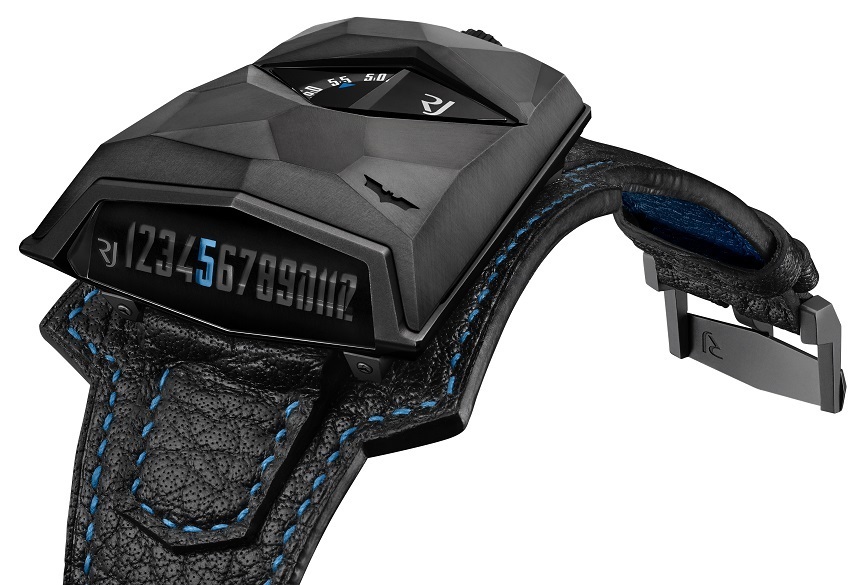 Directly from the current retro-futurist Haute Horlogerie now become trend is the new Romain Jerome Spacecraft. Created by the pen of the famous designer Eric Giroud, animated by mechanical unlikely Venus and Jean-Marc Wiederrecht – owner of the workshop micro engineering Agenhor under the supervision of the President RJ Romain Jerome Manuel Emch, the new and unconventional timepiece brand for years known for His inspirations steampunk highlighted by iron Titanic seems made to evoke scenes in Blade Runner – Rutger Hauer famous monologue in which he quoted the unforgettable words “… combat ships on fire off the shoulder of Orion ..”.

Eric Giroud – signature watches as MCT Sequential One and MB & F HM3 (along with Wiederrecht) – the goal was to create unusual shapes which might contain a mechanical equally unprecedented. After several sketches Swiss designer has come to conceive of the titanium case Romain Jerome Spacecraft giving it a trapezoid shape and covering it in black PVD.

A unique feature of this timepiece is the reading of the time: the minutes are marked by a black disc that rotates in the back cover and characterized by a red arrow shown on a sapphire glass, the number of hours Retrograde on the front and is highlighting always in red numbers arranged in line.

The aesthetics of simple apparent Spacecraft hides a complex movement created exclusively by Jean-Marc Wiederrecht for RJ-Romain Jerome. The Caliber presents a sort of cart driven by a spring which moves every 60 minutes the red cursor of hours placed under a sapphire glass and metallic visible laterally. The black disc on the upper part of the casing rotates on titanium plates. The adjustment takes place via a screw crown positioned on the opposite side of hours.

Manuel Emch as we see clearly in the press release Romain Jerome Spacecraft is a watch that reflects the original and unusual approach to watchmaking brand. Note that a few months ago was presented MB & F HM5 Spacecraft which – while not comparable to him or to the characteristics or for the price – takes part in the forms and reading the long side.

From here shortly we will see other examples of “spaceships” (meaning spacecraft) or “70” wrist – which then reported to the influences on design is about the same thing? We’ll know here in about two months at the Fair Baselworld 2013.