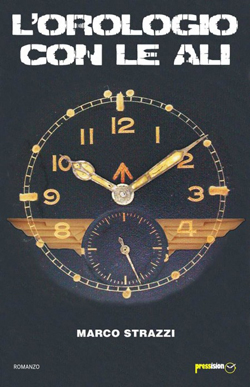 The story revolves around the clock lost on the morning of June 6, 1944 – the day that history has dubbed D-Day – and reappear seventy years later to mark the hours and minutes until the meeting with the fate of the three protagonists: a British paratrooper at the baptism of fire, a French child struggling with the fear of the dark, and his father, the darkness of his greatest sorrow has never forgotten.

Distant in time and space, yet all three have a mission related to the same object, the watch with a female name and the wings of the British Parachute Regiment engraved on the caseback. A mission that will take them to contemplate their past and their future with different eyes.

Journalist, author of two books well known to Italian fans watch (“Hands & C.” and “Rolex from A to Z”), guest Class Watches with an article on design, Marco Strazzi debut in fiction with a historical novel that is also a story of courage and a bridge between the heroes of yesterday and tomorrow.

The choice of January 27 as the second day of free promotion has a symbolic value. On the Sunday in which we remember the darkness of the Holocaust, it seems right to make available to everyone a book that is also a tribute to the Liberator came from afar to return the light of hope to the oppressed.

I recommend you read it for two days is FREE! And if you want then come back here to tell us how it went … A Saturday and Sunday with: THE CLOCK WITH WINGS.