Warning: Parameter 2 to wp_hide_post_Public::query_posts_join() expected to be a reference, value given in /home/watchesontime/public_html/wp-includes/class-wp-hook.php on line 303
 Jackie Chan with Urwek UR-202 AlTiN wrist in the movie CZ12!During the filming of his latest film CZ12 "Chinese Zodiac" actor Jackie Chan Menu 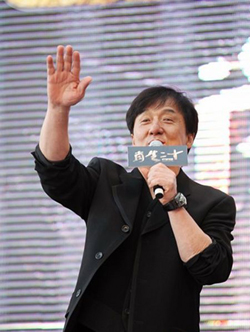 During the filming of his latest film CZ12 “Chinese Zodiac” actor Jackie Chan stunt shot the film with a wrist connected to the Urwerk UR 202 AlTiN – a special version which steel is treated with elements of aluminum, titanium and Nitrile.

As stated by Yacine Sar chief press officer of Urwerk watches, last year Jackie Chan has literally taken a fancy to the Haute Horlogerie sent in the future of Felix Baumgartner and Martin Frei – founder of Urwerk read here all the items that concern them.

The actor was enthusiastic in particular UR-202, the small Swiss brand, which probably can not afford to “invest” more in testimonials like that, very pleased, immediately sent him 4.

A Jackie Chan those UR liked it so much that he decided that “all good movie CZ12” – watch the trailer – would take them on the wrist, so I mailed him back only 2! It was in June.

Now, the film is showing in all cinemas in Asia, but soon it will be here too. The photos show Jackie in an interview during the launch.

In case you – passionate reader of Class Watches go see it .. you’re probably one of the few in the audience to learn something more about that, instead of a weapon in addition to some fearsome martial art, is actually a piece of complicated watches made by hand.