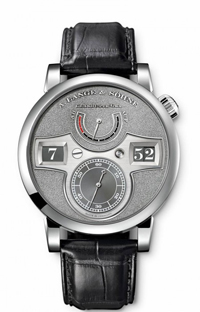 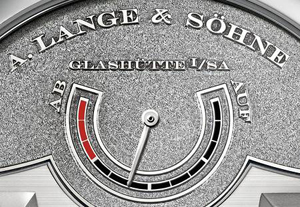 Its movement is provided with a constant force mechanism – usually applied routine on tourbillon high level to lever the cage more continuous energy that can be. The manufacture of Glashutte was the first to use this mechanism to allow the hour digits scattassero quickly averting that you could never experience any jamming.

In this limited edition black rhodium-plated white gold dial shows a fascinating grain structure, typically signing Saxon, as can be seen – although interpreted differently – in the Glashutte Original Senator Observer.

The method developed by A. Lange & Sohne is to use a center punch that move, led by the capable hands of the craftsman, creates obvious on the surface granular texture. Instead, the curved written “A. Lange & Sohne “under the Glashutte I / SA”, and “AB AUF” – including the notches in the reserve – are raised, as if magically suspended in the nothing.

The bridge incorporates the signs of the time is in silver, decorated with horizontal linear grain. The large white numbers of hours and minutes, as well as the great indicator of the second round, they are solid silver.

This, too, Lange Zeitwerk features a platinum case of 41.9 x 12.6 mm can be found on the back where the serial number of the case and come to a limited edition.

The view from the sapphire crystal back (unfortunately not yet available) shows the Calibre L043.4 manual winding – connotations undoubtedly Saxon for a ¾ plate and screwed gold chatons. The signature A. Lange & Sohne on the barrel bridge charge is also engraved in relief.

Other details which we hope to soon see the finish concern where they underwent the wheels of the train of time. Escapement and its lever are made of gold glass, in tribute to those who Lange built in the second half of the nineteenth century. In fact, at that time, to escape the phenomena of magnetism which the regulatory mechanism might be interested – thus affecting the accuracy of the timepiece – it was bound to use the precious metal, as the current non-magnetic metal alloys had not yet been invented.

Why the chronograph watch is popular

Watches are one of themost popular clothing accessories world over. They are worn by both men andwomen, contrary to a…

Top Tips on Travelling with Your Watch

A watch may not be at the top of your travel essentials list, but it is an item that may…

How to Buy that Perfect Watch for Her

A watch is one of the most elegant gifts that you can give to people, but selecting the perfect one…