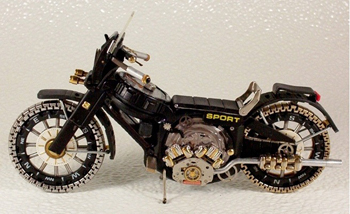 Until recently, the clock used for timing. That all changed when the Ukrainian painter Dmitry Khristenko parted framework convention and used the parts of timing devices in the production of mini-motorcycles. It would seem an impossible project, but that just is not capable of human imagination …

In his works, Khristenko uses only old, broken watches. First he dismantles them, and then undermines the elements and adds a new configuration. To create a motorcycle used dials, gears, bracelets, and other elements of the mechanism

To create a mini-bike takes about 50 hours time. One such model is about 300 pounds.

As you can see, for a creative person, even a broken clock can be a source of inspiration. Khristenko sees them not only as a symbol of time, but as a creative material.

In addition to motorcycles, it also has a series devoted to insects – The Time Machine and Steampunk Clockpunk Mechanical Bugs.

If your have a broken clock, take the time to throw away: the creativity of them can get a little ping-Harley-Davidson!

Chronographs Watches.The measurement of time is a challenge, the man has always been investigated.

The measurement of time is a challenge, the man has always been investigated. Both scientific experiments and the high-performance sports require the technology from its highest.