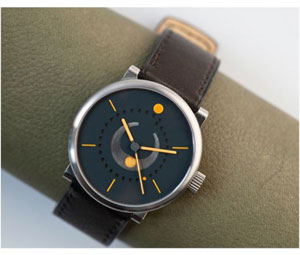 The agreement Ulysse Nardin – Ochs und Junior is part of a long-term strategy: his first goal is to establish a stronger synergy between the two companies. Secondly, it serves to consolidate and the relationship between Ludwig Oechslin and Ulysse Nardin, after his planned resignation in 2014 as curator and director of the Musee International d’Horlogerie.

At Baselworld 2012 Ulysse Nardin has introduced the Marine Chronometer Manufacture a beautiful clock, which takes in the style of those navy, equipped with the basic movement Caliber UN-118. It promises that their next project independent watchmakers Ochs und Junior will use precisely these movements in coordination with the production Ulysse Nardin.

The Caliber 118 is a recent micromechanical masterpieces of Ulysse Nardin. Following in the footsteps of Sonata model with Caliber 66/67, together with the Anniversary Caliber 160, the first timepiece designed and produced in-house.

The escapement of Caliber 118 is the result of collaboration between Ulysse Nardin and Sigatec based in Sion, Switzerland.

The caliber 118 is the first member in the family of movements with an exhaust product in-house and patented DIAMonSIL. Even the oscillator, is always made by Ulysse Nardin – adjustable with the aid of four screws – and covered by a spiral silicon 1.1.1. This oscillator, patented in 2007, was launched with the Sonata Silicium in March 2008.

DIAMonSIL is the name of revolutionary material made from” union between the silicon and polycrystalline diamond. It is a very strong but lightweight material that eliminates the clutch and the need for lubrication of the escapement.

The Calibre 118 has a power reserve of 60 hours and its date corrector, which allows adjustment in forward and backward in a few seconds.

Ludwig Oechslin has long been the watchmaking genius behind every complicated project of Ulysse Nardin, as – for example – the iconic Freak. Together the young Beat Weinmann (hence “Junior”), have recently opened the Ochs und Junior.

It ‘a factory that builds unique timepiece looks very simple. The dials and hands are minimalist, the boxes are semplic forms – can be of various metals – and are almost always in satin finish.

The brand’s mission is to make unique and complicated watches at very reasonable prices. Some examples? Ochs und Junior over at Hue shows the date, dual time zone and moon phase indication with an accuracy of 3,200 years! Or the model “fifty years” which takes only THREE COMPONENTS to provide the complication of calendrio Annual…