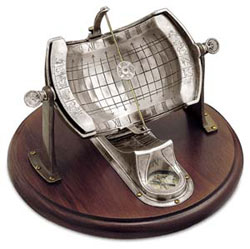 The world of sundials is still very attractive, and as soon as we succeeded in making a model, it is ready to communicate with us: just know how to read, but this is a basic, as we shall see. The following explanations refer to a clock of moderate complexity, such as that shown in the figure: a vertical clock hours of real time with polar style, parallel to the Earth.

The reference check to read the time as we know it is the shadow of the stylus: the position where it falls, compared to the time lines, gives us the true time zone (“true” as genuine, produced directly from combined motions of rotation and revolution of the Earth who have not, however, a constant trend that we normally use such as civil, “zone” because it refers to the central meridian of time, for Italy, 15 ° E, instead of the local meridian); for the average time zone (“medium”, that is made constant to remedy the deficiencies of the true solar time), which is nothing but the hour shown by our normal wristwatches, just take a look at the equation of time ( the equation of time is that diagram corrugated for each day of the year provides the difference between the true time and mean time), and add or subtract a certain number of minutes per hour marked by the shadow of the stylus. That’s it.

Chronographs Watches.The measurement of time is a challenge, the man has always been investigated.

The measurement of time is a challenge, the man has always been investigated. Both scientific experiments and the high-performance sports require the technology from its highest.