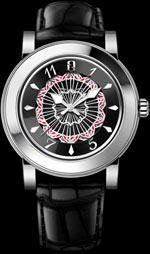 2012 was for the Swiss watch company Quinting year of innovation and presentation of unique products, despite the fact that the summing up at the beginning of the year several early. At the time of the annual international exhibition in 2012 the company presented the BaselWorld Wristwatch Metal Discs, which is characteristic for the transparency of the company’s products was slightly modified.

As noted by the company, the original clock Metal Discs can be described as follows: the invisible became visible.

First of all, it should be noted that the concept of Metal Discs – is not new, it is based on the famous clock Quinting, which designers have simply given new life by replacing some of the sapphire disks, disks of polished stainless surgical steel. Thus, urban designers combine steel with sapphire nobility: the metal like a breath of youth and the dynamics of the new model.

The result was that some of the previously completely transparent mechanism became visible, forming intricate patterns, which makes the clock and the mystical “secret power”.

Watches Metal Discs are available in three versions, each of which stores a unique secret of transparent mechanisms of Quinting. Some instances of the models are equipped with rotating hour and minute discs, as well as rotating counter clock wise disks.