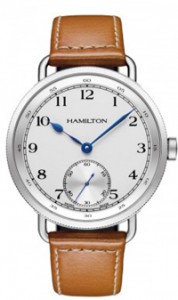 Hamilton chose BaselWorld 2012 as the springboard for his new Hamilton Khaki Navy Pioneer, which will be produced in strictly limited edition.

The timepiece is inspired by the marine chronometers that built the brand in 1940. This fact serves as both a wrist watch or a clock table.

Referring to the year in which Hamilton was founded, will be made of 1,892 numbered copies, to remember his “ancestors”, delivered in a wooden box of Hevea. Its characteristics of precision can be viewed comfortably holding it to be always with him on the wrist, is proudly showing it on a table.

The Hamilton marine chronometers have demonstrated an accuracy unparalleled in the past. Today Hamilton Khaki Navy Pioneer Limited Edition adopts the same ambitious path of achieving the highest standards of reliability.

Features a Swiss-made mechanical movement with manual winding ETA 6498 with unique decorations to honor the anniversary of 120 years of the brand. Perfectly in tune with the precise measurement of time shows a dial with central hours and minutes and small seconds at 6 o’clock. His case is water resistant to 100 meters deep.

Just like the model 1940, Hamilton Khaki Navy Pioneer presents hands-blue ocean, along with other details that recall the past, like the silver dial, the wire loop strap and leather strap to attach it to your wrist.

During the Second World War in its Hamilton factory in Lancaster – Pennsylvania – produced 10,092 marine chronometers capable of meeting the highest standards of accuracy and reliability at that time were vital naval equipment to calculate longitude. Hamilton was the only company capable of building the huge military contract in just over a year.