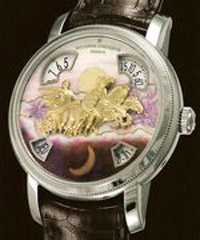 Absolute Champion – gold pocket watches Patek Philippe 1933release with 24 complications, for the manufacture of which took almost eight years! They were collected by order of the New York financier Henry Graves Jr… After the death of the owner in 1953, they gathered the collection was inherited by his children.

In 1968, the unique timepiece was transferred to the Museum of Time in Rockford. In 1999 the museum was closed, and all his exposure came at auction Sotheby’s, which was sold for $ 28 million. Patek Philippe Graves, provisionally estimated at no more than five million, was bought for 11 million to the “coppers.”

Second place
Release of pocket watches Patek Philippe Caliber 89 was timed to the 150th birthday of the company in 1989.

Hours consisted of 1728 parts and multiple timing indicated by arrows 24! Among the 33 complications, available in the model, there was even a pointer to the date of Easter. Preparation of “gift” has started nine years before the anniversary, five of which went only to the theoretical calculations. There were four instances produced Caliber 89: in platinum and gold in three colors. In 2004, the version in white gold was sold at Antiquorum for 5,002,652 dollars.

Third place overall and first in class “Watches”
His is a platinum Patek Philippe World Time,released in 1939. In 2002, at the same Antiquorum he “retired” for 4,026,524 dollars.

Special prize: the most expensive in the world steel watch
You’d be surprised, but again Patek Philippe! In 2004, a wristwatch Ref.530 1939 to pay 1,669,318 U.S. dollars. Curiously, the clock was devoid of any complications, except for an additional 30-minute counter at position “3” and tachymeter scale. And even more curious that in a hundred-plus copies of the modifications that were released during the period from 1937 to 1950, only a few were steel enclosures – a large part of the edition came out in gold and platinum.