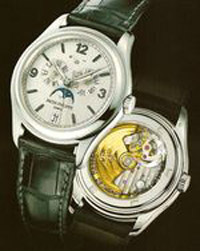 This is only partly true – after all, no one will deny the obvious high cost of gold, platinum and diamonds. However, it may happen that even a piece of platinum, studded with precious stones entirely, will cost less equal in size chronometer with no visible signs of luxury. Consequently, the time the price tag content not only determines the nature Carat. In fact, what factors really influence the chronometric pricing; we will try and find out now.

Let’s start with the principal. No, not with a compound of mechanics, but with a brand name. A person exposed to the magic of big names, as in all ages enjoyed the enterprising merchants. Good or bad, do not judge us, we can only state the obvious. Swiss watchmaking history full of legends, many of whom still live in obscurity and are waiting for their “rescuers”. And those lucky enough to be such a long time took possession of the minds of billions (and this is not an exaggeration).

If you compare the hours of approximately the same class with similar features and complications, but made, for example, textiles from the first ten of the world table of ranks and the manufacturer of the end of the hundred, the price difference would be awesome. It does not explain either good production, no highly qualified professionals, not high quality control – only the brand. An illustrative example of Royal Oak – a famous model, launched a series of Audemars Piguet in 1972 – a very eloquent in this regard. Steel case three arrows and … first-class price of gold chronometer. All of Europe was talking about an unprecedented marketing during the AP, which moreover do not fail, as predicted highbrow analysts, but spawned a global trend.

Today in the collections of virtually every prestigious brand there unpretentious steel watch for 8-10 thousand dollars or more. And it’s no surprise, because the way it should be. Point.And now you can talk about the mechanical complexity.Complexity can be different. On the one hand, there are the widely additional features such as date, day of the week, second time zone and even moon phases. All of the above and if the impact on the retail price of the finished product not much. On the other hand, are known such grandes (big) complications, as the tourbillon, repeater, perpetual calendar and chronograph.

The last part of this family as the only such complication, which appeared in the circulation, which became public domain and, consequently, lost much in terms of moral values (fairness, we note that market leaders have kept prices for its chronographs at the same level of status). Grandes Complications in various combinations guarantee an increase in the number of zeros on the price tag, and the hours you can safely invest – they are becoming more expensive at the prestigious works of art and real estate. And do not be afraid of disturbing reports from the Asian market, where already learned pretty well to punch the holy of holies Swiss kabinoterstva – the tourbillon. By this “whirlwind” this growing shaft aligned craft is not terrible.

Here two reasons. First in the manufacture of tourbillon essential manual work, which for the most minuscule pipelining method. And secondly, if not yet proven functional benefits of the tourbillon, is enough to put something into the mechanisms simply do not have a negative impact on precision. That is turbiyonovidnye carriage, nicely framing the knot ankeralans and in the minimum degree of leveling effect of gravitational forces. Incidentally, we note that a copy perpetyueley and rehearse it until it is: too complicated to make, and they too quickly manifest themselves in imitations telltale flaws.

The following pricing factors we would call the new technologies and inventions. In pursuit of accuracy and reliability of leading brands cooperate closely with the scientists, funding their work to establish ideal “time” materials.Patek Philippe, Breguet, Ulysse Nardin, Audemars Piguet and other authorities have moved the industry significantly towards the creation of key chronometric parts (shutter, the balance wheels, drive wheels, and even spiral) of diamond and silicon variation: durable, resistant to temperature changes and do not require lubrication. And because accuracy also depends on the ideal size of the aforesaid details have changed, and their production technology, standards are now calculated in fractions of a micron. When the housings are increasingly used new materials.

Hublot has long been experimenting with a “cocktail” of titanium, tantalum, ceramic, carbon, rubber, and other “eclecticism; Harry Winston produced a series of hour’s zaliuma (aerospace alloy for strength superior to titanium) a Zenith generally thought proper alloy christened him “zenitiumom.” The fact that all this is worth the extra money – and, as a rule are not small – it is obvious. The same is true of mechanical improvements. Despite the stereotype to say that all the important inventions in watchmaking were made during the time of Breguet, piggy hronopatentov regularly replenished every year.

The present was no exception. At random can recall just two highly effective innovation: the new split-second descent into the Audemars Piguet Millenary collection and uniform system of energy transfer in a clock work spring tourbillion Tourbillon Force Constant Academia of DeWitt … Now a few words about the print run. Again, human nature has a desire to possess unique.

The less the same things – no matter of hours or, say, the cup holders – exist in the world, so they are more expensive. Uncomplicated steel model of Patek Philippe, released edition of ten copies, is guaranteed to be an expensive collector’s rarity, which is on all the leaves far behind any serial platinum caliber, “weighed down” set of complications.

The examples are not far to seek: it is enough to open any directory auction house Antiquorum and poudivlyatsya prices outwardly unattractive worn lots with prestigious logos on the dials. Dreamboat all connoisseurs and collectors – piece unique – a single instance.” It is the sign of the exclusive owner of exclusivity (by analogy with the “regular” solely on the possession of limited hours, but all the same series).

And as final pricing, we would call a stroke already mentioned in passing above manual work.Which, alas, every year it becomes less and less. The industrialization of watchmaking, which began in the early decades of the XIX century, not for one second to slow progress, and today the term “manual” refers to such operations as “grinding”, “engraving”, “control” and even “build”, but not “manufacture”. In the price category up to 3-5 thousand dollars can not find the watch with a “hand signs.”

This does not mean that the process of creating a fully robotic chronometer is bad – it means that it is relatively cheap.But it is relative, because one hundred percent “conveyor” Rolex watches of the same name can not be quite so cheap. Furthermore, Rolex, along with Patek Philippe and Panerai are a triumvirate of brands, whose products rise in price regardless of market conditions (for example, at least, say experienced collectors, as they say will not be in vain.)

That – more proof of the magic of the brand and, in the case of Panerai, a consequence of miserable runs in the past. And a couple of words about the phenomenon of Rolex. Phenomenon – because it is the world’s only luxury brand, manage to remain so for the vast volumes of production. His worship in the United States and Latin America and in Europe as he is treated ambiguously. On the one hand, this is, of course, name, and on the other – very much commercialized and rustic in appearance. After all, despite what the fans of brand design “oyster” is extremely boring and does not fit into the growing trend of demand for the original stuff … At the end of this modest analysis I would like to outline the framework category of “expensive watch.”Everyone, as they say, his own, but we use the estimates of the producers themselves.

They are expensive model costs more than 40-50 thousand dollars. Something that costs 10-20 thousand, is in the medium price category, sometimes called a “gift.” Top managers, oligarchs, kings and sheikhs from time to time acquire small quantities of these timepieces as gifts to their surroundings and their relatives.

Themselves, they prefer products more expensive, and often even bought hours of individual assemblies. This service is provided by many sentries Homes and used as a source of income (because final prices barely cover production costs), but as a powerful marketing engine. The same can be said about the pieces uniques a set of unique features and original concepts of solutions. Although there are no profits will not do: each is a function and each decision must later be used in serial collections, and a hundredfold return on investment in them. So, in conclusion, we consider the contribution of materials to the retail price of hours. It’s pretty simple, as it was conceived of Mother Nature. The most expensive metal – platinum, the most precious stones – diamonds, rubies, sapphires and emeralds, which vary in price depending on the weight and purity.

Gold plating thickness is estimated (from 2 to 30 microns) and purity (14 carat or 18). The same thing with the bracelets. In honor of leather straps and strange animals, which are less durable, but looks more solid.

The most expensive glass – Sapphire, preserving their original “purity”, even when the whole body is dotted with scratched and scuffed. It is almost completely replaced the recent favorite watchmakers – mineral glass. On the plexiglass in the family of haute horlogerie speak generally not accepted – moveton.