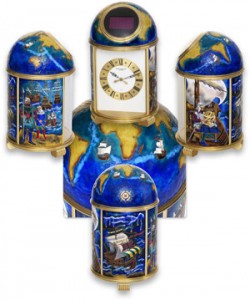 Split Chronograph in platinum casing Officer made the heart flutter, absolutely all collectors: an army of fans and Patek Philippe, and those who love chronographs (and in particular, the split-chronograph), and even those who collect clocks champions. The fact is, the newest hand-wound caliber CH R 27-525 PS – The first mechanism with chronograph function in company history.

Made it will be extremely limited. And besides, it’s the thinnest of split-chronograph in the world (the height of 5.25 mm caliber, and the model itself – only 8.5 mm). Prior to that, the company ordered a mechanism for chronographs at the Geneva plant Nouvelle Lemania. In the famous CH 27-70 caliber patekovsky this mechanism is turned after a long process and the bulkhead. It is based on it were created by the famous chronograph with perpetual calendar and split chronograph. New CH R 27-525 PS was initially established as the world’s finest caliber with a split-function chronograph. At Patek Philippe believe that this is one of the most complex functions in a mechanical watch, even harder minute repeater and tourbillon. In order to create the company a year ago was established department with the eloquent title Haute Horlogerie.

This department consists of several units of 5-6 watchmakers, each of which creates a separate module of a complex mechanism. After that, the mechanism of collecting for the first time, in order to test it running and functional characteristics. Then again caliber dismantles polishes and decorates each piece and then smeared and collect “fair copy”. In CH R 27-525 PS columned two-wheel drive. The prototype served as modified by as much as in 1903, Victorin Piguet Caliber 124 824.

For the same diameter, 26.9 mm thinner than its predecessor on the new 0.65 mm. Very original, and the system start and stop the chronograph – only two buttons (the usual split-chronographs are operated by three buttons). Button on the crown acts as a “Start”, “Stop” and “Reset” button and between “1 and 2 hours” can stop and start the split-arrow. Arrow 60-minute counter does not move every minute jumps and smoothly.

Finally, another advantage of CH R 27-525 PS – completely updated profile of the teeth of wheels, significantly reducing vibration module chronograph, friction and wear of the wheels, as well as providing a constant force effect, which ensures a more accurate stroke. And not without reason a new Caliber CH R 27-525 PS was placed in classic platinum corporate housing Officer. All have lived to this day Officer – the most desirable collectible watch and clock auctions champions. As with all models from Patek Philippe platinum split-chronograph Ref. 5959P has a diamond on the side of the hull under the mark “6:00”. And attention! Circulation of the first series is limited to 10 copies.