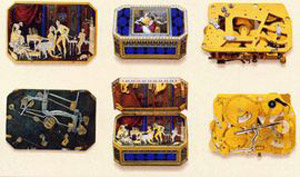 Hong Kong to Geneva drive?
Owner and president Osvaldo Patrizzi Antiquorum expected from the July auction Important Collectors’ Wristwatches, Pocket Watches and Clocks in Hong Kong a lot. Encouraged by the number of registered users: about 6,000 people set out to compete for the right to have 406 lots. And I must say, expectations have been met. Was sold watches worth $ 6.081 million – almost three times smaller than the spring auction Geneva, but more than in New York and twice in the winter here – at the Ritz Carlton. But in contrast to Geneva, this time loud sensation has been submitted. As expected, most of all – $ 412 000 – paid for the Patek Philippe Minute Repeater Tourbillon, No. 1903061, case No. 2906878, Ref. 3939H.

Minute repeater with tourbillon in a 34-millimeter case made of yellow gold was released in 2000 and belongs to the category of curiosities. The oldest was a lot 373 – music box (87 x 60 x 35 mm) Antoine Rojard a Geneve, No. 2174. Her in 1810 created a master Jean-Georges Raymond (Jean-Georges Remond). Golden casing is decorated with pearls and emalevoy painting. Under the cover panel with automatons – the lady playing a musical instrument, it sets the rhythm of the monkey, the students corrected each other haircuts.

Raymond was one of the most skilled craftsmen shkatulochnikov Geneva. Unfortunately, to this day lived just a few of his work. This is valuable because it is an autograph on the maestro. As a result, box went for $ 390 000.Third place ($ 190, 000) also got Patek Philippe, No. 3045226, and Ref. 5020P. This platinum chronograph tonneau case with perpetual calendar, moon phase indicator and diamond hour markers made only on orders from 1995 to 2001. Also of note is the steady rise in the cost of the German company Tourbillon A. Lange & Sohne. Thus, one of the 15 hours Tourbillon Pour le Merite, No. 107/150, Ref. 701,001in the case of white gold have been sold for $ 190 000.

It is only 10 thousand less than was requested for the same hours, but in a platinum case, this spring. Not justify the hopes of a unique set of collection a dozen Rolex Oyster Perpetual Day-Date with different colored dials. More than $ 170,000 for the entire set no one offered. And finally, the most expensive pocket watch ($ 170 000) was the famous Tourbillon with three gold bridges, Girard-Perregaux.Noteworthy, these 62-millimeter gold watch that the tourbillon carriage for them created in 1907 by a famous artist Albert Pellaton-Favre.

In the same year with a rare model for the time rate of the balance of 21 600 pc / h has been named the Observatory of Neuchatel best chronometer. Osvaldo Patrizzi very pleased with the results of the summer session in Hong Kong. “If our Asian branch will grow at the same rate and on, it will soon catch up with the local trades and overtake the Geneva – he commented on the results of the auction. – And this competition is good news. ”

The last hours of the twentieth century.For many Swiss companies have long been a tradition to celebrate different dates of release of limited edition watches.

For many Swiss companies have long been a tradition to celebrate different dates of release of limited edition watches. In our country, this practice has not happened.

Watch The Century Aviation.December 17, 1903 in the town of Kitty Hawk

December 17, 1903 in the town of Kitty Hawk, in North Carolina, an American engineer Orwell Wright tried to fly constructed by him and his brother aircraft.

Hard times came for collectors. If previously released limited edition in a matter of quantity, it is now stylish in vogue, and even such mass brands as Tissot