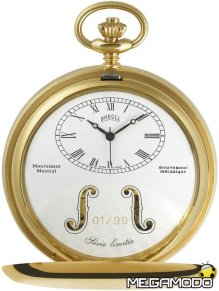 The legendary pocket watch that Clint Eastwood wore in the movie For a Few Dollars More is now possible to wear it.

The famous brand of watches Boegli, in fact, decided to play one of the objects of the cult western film, the musical pocket watch or onion that is holding the American actor in films of Sergio Leone, 1965.

The melody of the final duel, composed by Ennio Morricone, is known to all lovers of this genre and it is for the fans who Boegli decided to recreate this legendary model called the Far West.

So when the lid is lifted the musical mechanism is activated and re-create the famous notes of the film, by returning to the memory and the evocative atmosphere of the dusty Old West.

The design of this model is inspired by western movies, the typical reasons stand out on the face of Western guitars. The clock Boegli Far West is fully plated in shiny gold to 10 microns.

This model was produced in a limited edition of only 99 numbered copies.