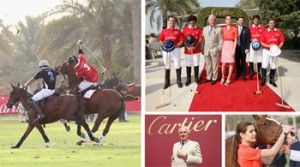 Usually, the team just watch companies are involved in various sporting events like the polo, but not too often that means they win. Rather, just the “main part – it’s too commercial”. A team of jewelry and watch company Cartier won the first international tournament at Polo International Dubai Polo Challenge.

The tournament was held under the patronage of the Dubai ruler’s wife – her Royal Highness Haya Bint Al Hussein. With a score of 10.09 Cartier team managed to snatch victory from the hands of reigning champions Polo Club Desert Palm in whose territory the game is played. Personally handed the awards to the winners, Sheikh Mansour Bin Mohammed Bin Rashid Al Maktoum. At the award ceremony attended by the Princess Charlotte Casiraghi Monaco and Managing Director of Cartier in Dubai Louis Furley.

Team player Adriano Agosti Cartier received from the hands of Sheikh coveted trophy. And another member of the team – Mohammed Bin Dry – was awarded the title of “Most Valuable Player” and also received the award in the knee and boots for Polo La Martina. Also from La Martina player Juan Jose Brain was handed a saddle out of the hands of Charlotte Casiraghi for his play on the pony, riding on a Juan Jose went on the field in the final.

Watches Cartier became the choice of such international celebrities as Alain Delon, Catherine Deneuve, Frank Sinatra and Cary Grant. Also in the collection is Cartier watches, which were created specifically for the Marrakesh Pasha – they are called Pasha. Now in the “Hall of Fame” Cartier is also a victory in an international tournament for polo.