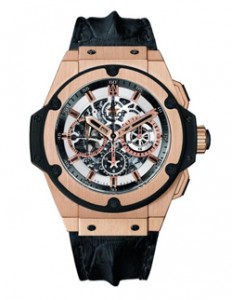 Watchmaker Hublot is issued specifically for the Russian fans limited edition model of King of Russia. These watches are presented in 25 copies of 18-karat gold.

The model has a 48-mm shell. In the milk-white skeletonized dial automatic movement visible UB 1240 Unico. These watches are equipped with a chronograph, which control buttons are placed side in the direction of “2 and 4:00.” 30-minute chronological count occupies the position of “3:00”, 12-hour is on the “9 o’clock” position and “6:00” is the second hand. Between grades 4 and 5 is the date of the aperture. On hands and hour markers applied black fluorescent coating (which is in the dark, of course, the lights are not black).

And now about the features that make these Hublot watches are called the King of Russia. The position of the “12 hours” is a gold star, except the color appearance of repeating the legendary stars of the Kremlin.

And of course, special attention should be transparent back cover, which is placed a white circle with a gold-painted completed. With photographic precision applied to the cover image of St. Basil’s Cathedral. In the visible image of black self-winding rotor on which is written the name of the line of King Power. The back cover is attached to the eight black screws.

Delivered watches Hublot King of Russia in the great black-and-gold supplementing the range of models alligator strap that has a rubber lining.

The new model is sure to make a special impression on the Patriots, as well as tourists to travel to Moscow, which remains among one of the most memorable memories. These watches were issued in the framework of collections of King Power, which also includes a model dedicated to the famous Formula 1 racing, whose official timekeeper is the mark of Hublot. However, watch Hublot King of Russia to racing do not have a direct connection, except that in the near future is expected to hold the Russian segment of Formula 1.