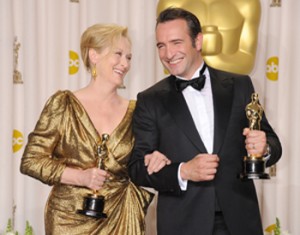 Recently received a well-known Oscar for best actor French actor Jean Dujardin as was preferred to all other brands of watches Jaeger LeCoultre. It was they who adorned his wrist at the 84th Annual Oscars Academy Award.

His costume was a superb actor added wristwatch Jaeger-LeCoultre Memovox Tribute to Deep Sea, representing a re-release of the world’s first chronograph for divers having a sound signal. These watches are cult among connoisseurs of art chronometric. To get to his collection Memovox Tribute to Deep Sea was only a lucky few – these watches have been issued limited edition of 959 copies.

This model was introduced at the show SIHH-2012. For the first time Deep Sea watches were issued in 1959. Alarm in the model was provided in order to effectively prevent the onset time of divers ascend to the surface – because the beauty of the ocean, and can distract from the continuous tracking of the time.

In 2011, the company Jaeger-LeCoultre watches the data were re-released. The two versions – 959 copies for the European market, 359 copies for the United States. These versions are distinguished from each other by design black dial. In other hours are almost identical: 40.5-millimeter stainless steel, glass, Plexiglas (in the style of 1959) and an automatic mechanism 956 within the control of the central movement of the shooter, as well as setting the alarm time underwater.

Cruising the model is 45 hours. On the back of the watch engraved with the image in the diver flippers and spear in his left hand. Waterproof model is 100 meters.

Love the actor to the famous watch brand, it seems, shared by his other half. Wife Jean Dujardin was at the Oscars in a wristwatch Joaillerie, which shone 106th diamonds. This is a vintage model from white gold bracelet in platinum.