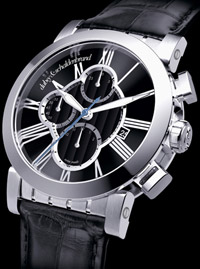 At the initial stage of the company’s goal was to create a reliable and at the same time inexpensive chronograph. As a result, developed a simple principle, which essentially was a genius, between the dial and the glass is located coil spring was set in action by clicking on the button that was on the crown, and then launched second chronograph hand, allowing you to measure the time interval to 58 seconds. This mechanism is called Index Mobile and has emerged as a brand Dubey & Schalden brand.

The company’s goal – to create high-quality watches. That is why it produces in a year no more than 6,000 copies of hours.

In addition, Robert believed that the clock should not be luxurious and expensive. And then, in 2005, was released on a split-chronograph named Dubey & Schalden brand Spiral Rattrapante, which was sold for 6800 euros.