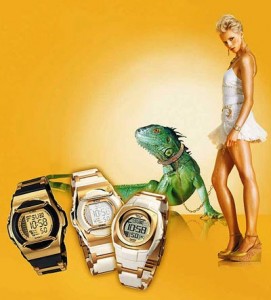 Casio regular season meets three innovations: a series of elegant models of Baby-G, the thinnest watch G-shock and the new “SUV” family Mudman. The fact that two of the three models designed specifically for our country, clearly shows: Casio considers Russia as one of the most important markets, and nowhere to go is not going to.

There just was not in the models of popular collections Baby-G! Here is a Casio watch with almost any functionality, a variety of designs and colors. But gold-plated models have appeared for the first time. It is not hard to guess what they are made personally for Russia: in the U.S. and Europe are popular colder steel watch.

The four new models – MSG-164CG-1VER, MsG-162CG-9VER, MSG-172CG-9VER and BG-1223G-7VER – in gold performance continues the popular line of Baby-G Sweet Poison. They have no sharp corners, sharp protrusions and challenging forms. Hours surprisingly elegant, combining functionality, modernity and reliability.
In new products there are several reasons to become popular in our country. Firstly, these models are versatile and not tied to a particular style of clothing. Line sweet Poison is designed for young women and middle-high income and is positioned as a fashion-attribute, but this watch is equally suitable for everyday wear, sports, walks and discos, so will be interesting to a wide range of buyers.

Secondly, the “golden” collection, coming to replace the white-black-rose, whose three colors were especially popular this spring and summer, is responsible fashion trends of the coming season. Bright, warm, sunny colors draws attention to the cloudy days of autumn and long winter twilight. Best of all, these watches look good in the cold period, with black and dark blue clothes.

And the third reason is to have them in stock – advertising campaign, which will soon start in lifestyle-magazines for girls, where the emphasis will be placed precisely on the Gold Collection. In the Russian market “golden” hours will appear in the middle or end of October – in the midst of a golden autumn.

The new line of watches G-shock G-056 have also been developed specifically for Russia and CIS countries. They are the “lite” version of the already known models with radio-GW-056E.

Radio control as a way to ensure the highest precision clock through radio reception is very popular abroad, but useless in most parts of Russia, as the nearest repeater is already in Germany. Removing from the case “superfluous” and returning the device instead of a standard solar cell battery (which is designed for 5 years – average duration of use of digital clocks), engineers are much easier and, importantly, reduce G-shock. It is expected that the retail price of G-056 is about 2500 rubles – less than $ 100. On top of getting rid of the bulk “of equipment” G-056 is very slim, compact model sporting G-shock.

New product should appeal to people already familiar with this line for hours. They will be able to afford young people involved in sports, including those mentioned dignity “neubivaemy – strength, comfortable lighting, ample opportunities timer and stopwatch, memory for time zone (world time), but could not afford to buy the former model. “Advanced” youth appreciate G-056 as a “cool”, but rather a practical and modern accessories from the company Casio, which is surely follow the trend of reducing the size of electronic devices.

The appearance of G-056 on sale as planned in mid-autumn.

Many people who lead active lifestyles and enthusiastic extreme sport, has already caught the fancy of hours in a series of Mudman, released earlier. And they certainly pay attention to the new model G-9000.
Mud translated from English not only as a “mud”. It traces the taiga fire smoke, the dust had settled Trampled roads and mucus lichens conquered the rocks. Mudman – people, past fire and water, storm and roads. Hours Mudman look big and menacing as the wheel all-terrain vehicle, not constraining their size.

The developers added a Japanese “tanks” new features, and now an electronic machine will give this man almost everything that may be required in the active leisure and hard work. Trump Series – dirt-and water-resistance, coupled with a powerful impact protection. The devices can withstand the toughest weather conditions.

In addition to severe athletes these hours surely interest for young people, only distantly related to risky activities as their peers. After all, “look” is often more important than “being.” Put about four and a half thousand for a stylish accessory (such, presumably, the price will be G-9000) and being branded extreme for many is not a problem.

Model G-9000-1VER, G-9000-3VER and G-9000-8VER focused on the autumn-winter season. First painted in cool tones of black, soft color of the third resembles a ripe olive. They sell much advertising to support the status men’s magazines – a series of simple “requests” in the window, and will certainly stand out from the “crowd”.